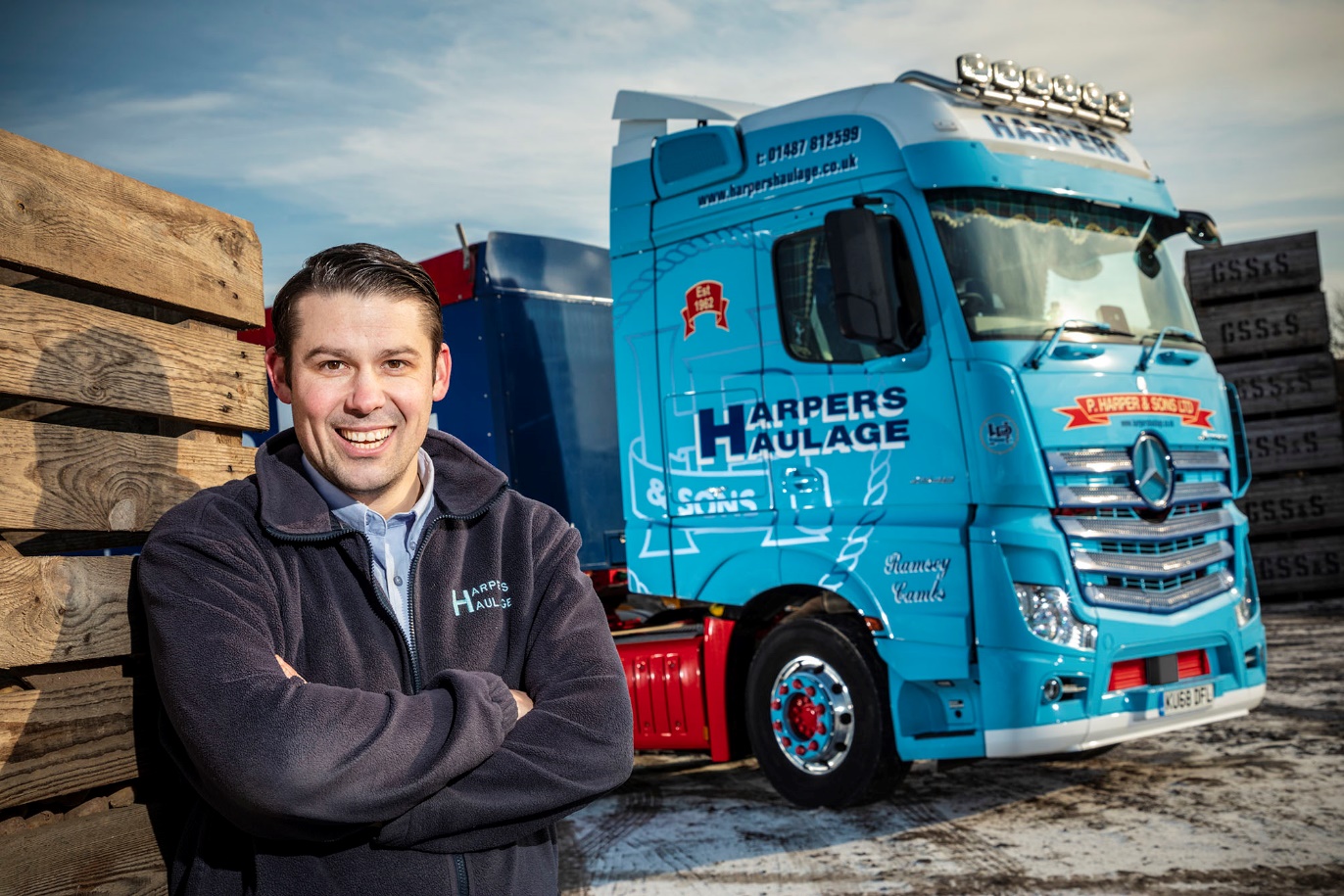 The first Mercedes-Benz truck to wear the eye-catching colours of Cambridgeshire’s P Harper & Sons is proving every bit as fuel-efficient as hoped, while also winning a resounding ‘thumbs up’ from its driver.

Transport Manager Matthew Harper, who is heavily assisted by his brother Adam, said that after four months on the road, and with more than 27,000 miles under its belt, the Actros 2548 BigSpace tractor unit was living up to all expectations.

“Returns vary but it’s averaging 9 mpg, which is very good indeed for our line of work,” he confirmed. “Driver Rob Parkinson loves it, and reckons it’s the best vehicle he’s ever had. He came out of a Swedish truck and says he wouldn’t go back. I’ve taken the Actros out myself and it’s certainly a lovely drive – the cab is extremely comfortable and well laid out, the automated transmission is very smooth, and the engine pulls really well.”

A third-generation family business, P Harper & Sons is based at Ramsey Heights, Huntingdon, and serves the agricultural sector. Its transport operation, which trades as Harpers Haulage, runs a mixed-marque fleet. Much of the company’s work is focused on potatoes, onions and carrots – a special handling service entails debagging, emptying bulkers, and grading, before packing the produce into boxes and delivering to customers.

The Actros arrived via Dealer Intercounty Truck & Van with a factory-fitted fridge and microwave, and a long-range 490-litre fuel tank in place of the standard 450-litre item. It is powered by a highly fuel-efficient, second-generation 12.8-litre straight-six engine producing 350 kW (476 hp).

Economy is enhanced by an optional Predictive Powertrain Control system – an innovative cruise control that employs 3D mapping and GPS data to scan the road ahead, this well proven technology manages gear changes and vehicle speed, making full use of momentum and of the Mercedes PowerShift 3 transmission’s EcoRoll function.

With its highly specified and smartly liveried vehicles, P Harper & Sons enjoys a strong reputation within the local trucking fraternity. Its high praise for the Actros is therefore great news for the team at Intercounty Truck & Van’s Peterborough branch, where the truck is being inspected and maintained under a five-year Mercedes-Benz Complete Service Contract.

P Harper & Sons works for major growers. Pulling potato bulkers, curtainsiders and tipping trailers, most of its trucks are out all week, collecting fresh produce from farms nationwide, and delivering to processors and packers.

Matthew Harper, whose grandfather Peter established the business in 1962, and whose father Nigel and Uncle Jonathan are now Managing Directors, continued: “We’d tried Mercedes-Benz demonstrators in the past but never taken the next step and purchased one.

“We’ve done so on this occasion because the vehicle came highly recommended by a good friend of ours, who told us his drivers love their Actros, that they’re fantastic on fuel, and that he’s had very few issues in terms of reliability.

“Intercounty Truck & Van also put together a very competitively priced package, and the fact that its Peterborough workshop also has a dedicated ATF lane was certainly attractive to us. Economy is crucial, of course, and the Actros is certainly delivering as far as fuel-efficiency is concerned. But so, too, is back-up – we’re a seven-days-a-week operation and cannot afford unplanned downtime, so we continue to monitor the Dealer’s performance closely.”