How many errors will you make today? 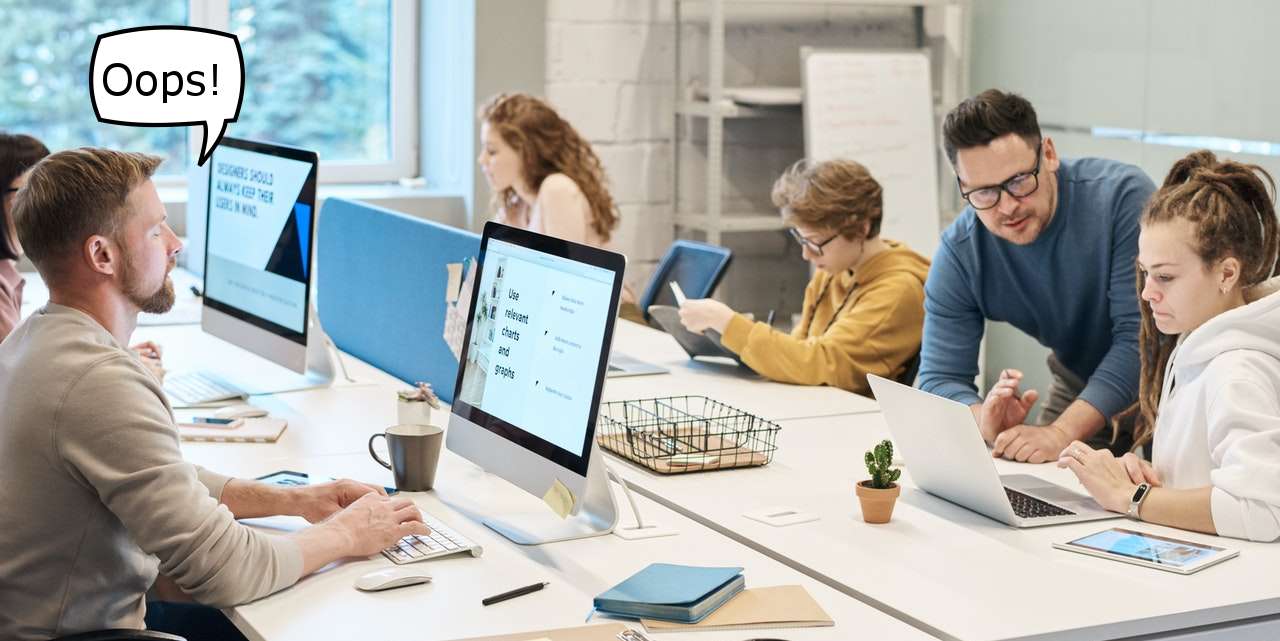 “To err, is human”, true but it does have a cost, an impact on a business and often results in a disappointed customer.

The greater the monotony of the work activity, the higher the error rate in most situations according to research with a typical level being 4% of transactions.

Can you avoid human error in business processes?

WHAT IS A “HUMAN ERROR”?

Here we are considering an “Action” that is unintentional and consider a mistake rather than any deliberate action intended to cause a problem.

There are four types of “Human Error”, namely:

These are best illustrated with examples

- Approximately 150,000 people a year put the wrong fuel in their car. With costs to fix the situation ranging from a £100 pounds to thousands, it is a big issue. This type of incident is an “Action Slip”. People know what to, but due to lack of attention in the moment they use the wrong fuel.

- Keeping with the car examples, getting in the car in driving off without putting a seat belt on is a “Action Lapse”. Drivers know it needs to be done and do it most of the time. When it occurs, many cars will give an audio warning to the driver to remind them of the lapse.

As temperatures change car tyres need to be inflated by different amounts. For each 10 degrees increase in temperature the tyre pressure will be increase by 2 psi.

- In the same situation following the weather change, the driver fitted ice chains. That would be “Applying the wrong rule”. Ice chains should be applied in low temperatures were there is snow on the road.

In terms of the use of business computer systems, the same types of human error occur but the situations will be much more specific to the company and the computer applications.

CAN HUMAN ERRORS BE PREVENTED?

What can be done to prevent human errors with such computer applications?

- Simple value checks can be made on fields such numeric, alphanumeric, etc.
- Range limits can be applied, validation rules between fields can be devised, etc.

As most people will have experienced, it is possible for valid values to be assigned to the wrong situation, which can result in customers saying “I did not order that!”.

When complex processes are involved one of the recognised best ways to reduce errors is the use of “Check Lists”. These documents act as corporate memory of best practice and provide a person with an extra opportunity to verify that none of the types of Human Error have occurred. For this to be achieved, the Check List has to be thoughtfully completed and not just treated as “tick box” exercise.

When errors have occurred, the resolution of the situation is about attitude and a process to fix. The adoption of a “Blame” culture can lead to attempts to cover-up an error which is never a desirable situation. The best companies look for an “Open Loop” culture and “Continuous Improvement Process”, that can be deployed alongside an “Error Detection” process.

Once errors are discovered, actions are followed to mitigate the damage and recover the situation. With the immediate position is under control, improvement activities need to start. This requires “Root Cause Analysis” to discover where the error occurred and if possible “Why” and “How” it happened. With that information available actions can be consider to reduce or prevent the error occurring in the future. This might be as simple as adding an extra item to a checklist.

A typical emphasis from the adoption of checklists, is the priority for accuracy rather than speed. With a “Get it right first time” mentality.

There are many methodologies (e.g. Six Sigma, Lean, Quality Function Deployment QFD, Soft Systems Methodology SSM, Failure Analysis) available for both problem solving and process improvement. Once a change is identified, it is worth being aware of the law of unintended consequences, so that an the implementation of the change does not cause a bigger issue somewhere else.

HOW CAN AUTOMATION HELP?

One of the stated benefits of business process automation with software robots to implement robotic process automation (RPA) is the improvement in quality. The reason for this benefit is that although software robots simulate what a human would do on computer applications, when robots perform the activity they do it with 100% consistency. Software robots do not get tired, or distracted, or make human errors, they only know how to perform the logic with which they are configured, no more and no less.

Although software robots will execute processes with 100% accuracy, if they are given “Data with errors”, they will process it the same as good data. One effective use of software robots is to use their capacity to complete repetitive work such as detailed comparisons and cross checking. Such activity is often defined as a background action, over 99% of the time everything will be aligned, but when the discrepancy is found the software robot can highlight it. Such monotonous tasks are ones where humans make more errors but where software robots deliver the required consistency.

Earlier, the concept of checklists was covered in the context of them being used to avoid human errors. When automation is being considered, another approach is to use the software robot to perform the checklist work as this delivers an independent action from the human activity and ensures a consistent application of the checklist criteria.

Human error is part of life, but effective processes and the appropriate use of software robots for automation can reduce the risks arising from human errors.

Ether Solutions are specialists at using software robots to implement Robotic Process Automation (RPA) which helps businesses with Productivity and Quality. By combining Artificial Intelligence (AI) into the solutions Intelligent Automation is achieved.